A bus driver sacked for asking an abusive passenger to get off has won her unfair dismissal claim.

The Fair Work Commission ordered the company to reinstate the “proud and caring bus driver’’ to her former role, with continuity of service and backpay.

Amie Logsdon worked for Surfside Buslines from April 2019 until her dismissal on 22 September 2021.

Six days earlier, a young adult male passenger stepped on to a bus driven by Logsdon.

The passenger didn’t pay his fair and sat in seats reserved for disabled passengers.

He also wore his face mask under his chin.

Logsdon asked the passenger to put his face mask on properly.

The passenger replied “Fuck off Karen”.

Logsdon then told him to get off the bus at the next stop, however, he refused to do so.

As a result, she contacted the company control room requesting for police to attend and told the other passengers to catch the next service.

The rude male passenger eventually got off the bus after stating that he was a law student and that the police would not come.

By the time they arrived, the passenger had caught another bus. 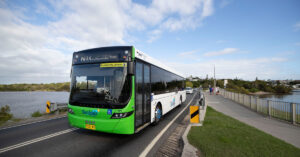 Logsdon told the passenger to get off the bus after be was abusive towards her.

“Frontline Staff are not expected to undertake any enforcement activities in relation to passengers not wearing a mask.”

Following an investigation, the company terminated her employment, accusing her of failing to follow this direction.

“Your conduct during that incident:

However, Commissioner Bernie Riordan did not agree.

He found the bus driver did not engage in “enforcement’’ of the mask mandate, but rather, was concerned about the safety of herself and her passengers.

Mr Riordon said Logsdon asked the passenger to leave the bus because he verbally abused her, and not because he refused to wear his mask.

He therefore found that Surfside Buslines did not have a valid reason to sack Logsdon.

As a result, he ordered the company to reinstate the “proud and caring bus driver’’ to her former role, with continuity of service and backpay.

He was scathing in his criticism of the employer:

“I find it incredulous that any employer would dismiss an employee for asking a passenger to comply with a government mandate.

“This abuse is clearly a breach of the passenger’s responsibility to act in accordance with Surfside Busline’s Passenger Code of Conduct.

“The passenger claimed to be a law student. The respondent should have sent the appropriate section of the video to the dean of law at the local university so that he could be identified and appropriate action taken against him, rather than dismiss the applicant.” 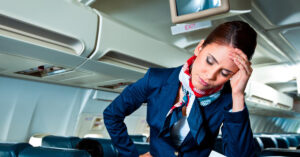 “Virgin flight attendant sues after being deemed a safety risk”

Logdson later spoke about the incident with the Gold Coast Bulletin.

“Driving a bus really is a frontline job and you’re on your own,” she said.

“It’s tough when you’re dealing with abuse or disrespect, but I actually really loved my job.

“The vast majority of my passengers are wonderful people – the elderly who caught the bus every day, school kids who you want to look after – it’s just a real slice of life at every stop.

“But I think when the pandemic started, everyone’s tensions, tempers and anxieties were raised.

“On that particular day, it was a guy who was just disrespectful and it escalated. I wish it hadn’t happened.”

“Every driver and every worker is doing the best they can. Think about other people on the bus as well. We’re all just trying to get through our day,” she said.