A young factory worker who was sacked for doing burnouts on a forklift has lost his unfair dismissal claim, despite his employer failing to follow procedural fairness, including not giving him a chance to respond to the allegations against him.

The Fair Work Commission ruled that even though there were procedural deficiencies, the dismissal was fair because the young man’s conduct was “so extreme that it does not warrant any further inquiry”.

The Commission found that there was no explanation or mitigation that could have avoided the dismissal.

On a Thursday afternoon in October last year, Macumber and a co-worker were left unsupervised, and decided to do burnouts on a forklift.

To enhance the burnouts, Macumber smashed glass bottles and spread thinner on the factory floor as an accelerant and lubricant.

The stunt was filmed by the co-worker on his mobile phone.

The following day, the production manager noticed the skid marks, broken glass and dirt and cleaned it with the assistance of Macumber.

While they were cleaning, Macumber blamed his co-worker for the mess and for doing the burnouts.

The co-worker subsequently showed the video footage to the production manager, who decided that Macumber’s conduct was serious misconduct, and dismissed him immediately.

Worker argued the dismissal was unfair

In the Fair Work Commission, Macumber argued that his dismissal was unfair because:

Commissioner Ian Cambridge didn’t buy the argument, ruling that the employer’s findings of serious misconduct were “unequivocally established” by the video, and that it had a valid reason for dismissal. 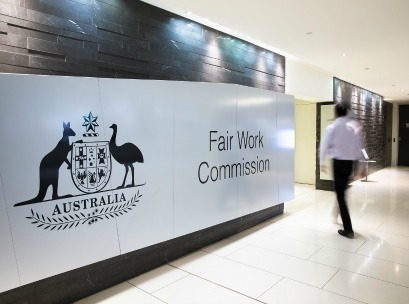 Employee not given chance to respond

Industrial relations advocate and Director of Litigation at Dismissals ‘R’ Us, Miles Heffernan, said in most unfair dismissal cases, the Fair Work Commission looks at whether the employee was given procedural fairness, including an opportunity to respond to any allegations against them, and a chance to have a support person with them during any disciplinary meetings.

“In this case, the Commission decided that the conduct of the young worker was so serious, that it outweighed other considerations like being given a chance to respond to the allegations against him, or being offered a support person to be with him” he said.

Commissioner Ian Cambridge noted that while the employer did not provide Macumber with an opportunity to respond, he said that in light of the “rather extreme circumstances” of the case, “there would, in reality, be no basis upon which the applicant could provide any conceivable response that could in any way justify or mitigate the misconduct displayed in the video of the forklift burnout incident”.

Commissioner Cambridge also found that as the employer had “irrefutable evidence of gross and wilful misconduct of such a nature and magnitude that it almost compelled dismissal, without any need for further inquiry”, procedures involving support person assistance became unnecessary.

In acknowledging that inconsistent treatment of employees regarding dismissal can be a basis to find a dismissal harsh or unreasonable, Mr Cambridge found that inconsistency in this case was not a basis as Macumber had “committed one of the most egregious acts of gross and wilful misconduct that I have witnessed in more than two decades of arbitrating unfair dismissal claims”.

In the end, Mr Cambridge found that while there could be criticism of the procedures undertaken, in light of Macumber’s conduct, this was not a basis to find unfairness

Despite the extraordinary ruling, Mr Heffernan from Dismissals ‘R’ Us warned employers to always follow proper processes when dismissing an employee.

“That means conducting a proper and thorough investigation, giving the employee an opportunity to respond to any allegations, and offering them the choice of having a support person with them during any disciplinary meetings,” he said.

“Most employers come unstuck in the Fair Work Commission because they fail to follow proper processes, and don’t afford the employee procedural fairness.”

“Whether you are a worker facing allegations of serious misconduct, or if you are an employer trying to investigate and manage a matter involving serious misconduct, it is always best to get professional advice, because if you handle the situation properly in the first place, it will almost certainly mean you will avoid a time consuming and costly appearance in the Fair Work Commission down the track.,” he said.

Commission says forklift operator sacked for phone use was fair

If you have been unfairly dismissed from employment, you may be entitled to compensation or reinstatement.

But you only have 21 days to make a claim, so don’t delay!

For help and advice, please call our specialist team at Dismissals ‘R’ Us on

Sacked school principal claims to be victim of malicious campaign