The Fair Work Commission found the comments that referenced Game of Thrones were not serious enough to justify dismissal.

The pair had used the work messaging system to make a series of sexually inappropriate messages about female colleagues.

For example, they joked that one’s sexual urges for a young female co-worker meant he might have to join the “Unsullied”.

That is a reference to the elite army of castrated warriors on the TV series Game of Thrones.

The pair also joked about switching a game of “words with friends” with a female co-worker to “friends with benefits”.

Nash and Jago said they regretted using the work system for personal conversations, however, they argued TasWater wrongly characterised their comments as sexual.

During one conversation, Nash wrote, “I’ve wanted to eat her since I got here”.

He denied he was referring to oral sex.

Instead, he argued he had been referring to eating Indian takeaway ordered from a nearby restaurant and had mistakenly left the letter ‘e’ off the word “here”.

In response to writing, “might need a rub down Saturday Night” when rostered to work with a female co-worker, Nash claimed he had been referring to being sore from playing laser tag. 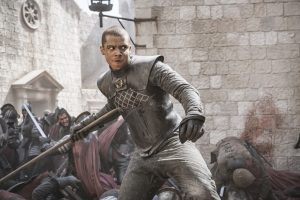 Grey Worm – a member of the “Unsullied” in ‘Game of Thrones’.

Commissioner Tanya Cirkovic found insufficient evidence to substantiate most of the company’s inferences.

However, she upheld its allegations in relation to the chat involving Game of Thrones.

Jago wrote:  “You mite (sic) have to join the unsullied so you stop thinking about it.”

Nash replied:  “If I did anything about it I wouldnt (sic) have a choice. Wife would make sure of that.”

TasWater argued it meant if Nash acted on his sexual desire towards a female colleague, his wife would castrate him.

Nash and Jago conceded GOT refers to the Game of Thrones series containing “significant nudity and sexually explicit scenes”.

However, they described their comments as “office banter”.

They also claimed the reference to the “Unsullied” was a “joke” about the worker’s sexual urges.

Commissioner Cirkovic found the pair engaged in “sexual innuendo” involving female colleagues in breach of the code of the conduct.

However, she also found it was not a significant enough breach to constitute a “well-founded” reason for dismissal.

“I have determined that the applicants’ conduct was in breach of policy, specifically that they failed to ‘act professionally’ and treat [the female colleague] with ‘dignity, courtesy and respect’.

“However, this conduct was, in my view, not sufficiently serious, either on its own or collectively, to constitute a valid reason for termination.”

She found the dismissal disproportionate and unfair.

She will now consider further submissions to decide if TasWater should pay compensation or reinstate the workers.